To share your memory on the wall of Tommie Rodgers, sign in using one of the following options:

Provide comfort for the family of Tommie Rodgers with a meaningful gesture of sympathy.

Tom was born to Homer and Euna Rodgers on May 3, 1938 in Bowleggs, Oklahoma. He served in the US Air Force for four years. He married Carolyn S... Read More
Tommie Ray Rodgers, 82, went to be with the Lord on May 15, 2020, in Bakersfield, California.

Tom was born to Homer and Euna Rodgers on May 3, 1938 in Bowleggs, Oklahoma. He served in the US Air Force for four years. He married Carolyn Sue Johnson on July 3, 1963. He earned a BS degree in business from Tulsa University in 1976. He worked 31 years as an accountant for Getty/Texaco. Tom and his wife owned numerous Hallmark stores in Arkansas and Oklahoma. In 1986, they opened Bobbi’s Hallmark in Bakersfield, California. He was a member of the Columbus Street Baptist Church for 40 years, where he served as Church Treasurer and Deacon. He was an avid fisherman and loved spending time with his family. His love for the Lord and his family was evident by everyone who knew him.

A visitation will be held Thursday, May 21st at 4-8 pm, Greenlawn Memorial Park, 3700 River Blvd. A memorial service will be held at a later date.
Read Less

To send flowers to the family or plant a tree in memory of Tommie Ray Rodgers, please visit our Heartfelt Sympathies Store.

Receive notifications about information and event scheduling for Tommie

We encourage you to share your most beloved memories of Tommie here, so that the family and other loved ones can always see it. You can upload cherished photographs, or share your favorite stories, and can even comment on those shared by others. 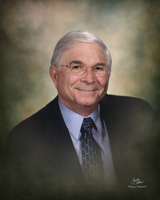