To share your memory on the wall of Richard Rountree, sign in using one of the following options:


Richard Dale Rountree was born May 25, 1944 to Joe and Eva Lee Rountree in Long Beach, California.
Richard moved to Porterville, California in 1948 where he was raised with his older brother Walter Rountree. He spent his childhood in and around Porterville area and graduated in 1963 from Porterville High School. Upon graduating he enlisted in the Marine Corps and served bravely in the Vietnam War.
On leave from the corps while visiting home, he met a young beautiful woman and within two weeks of dating they were engaged. Richard and Mary were married on January 14, 1967 at Chapel of the Bells in Las Vegas, Nevada. Together they moved to Bakersfield in 1972.
Richard decided that he wanted to pursue a career in law enforcement. He completed the San Bernardino Sherriff’s Academy while working for the Department of Corrections in September 1976. He transferred to Cal State Bakersfield Police Department and had a long career, retiring in September of 2000 after 34 years of working in law enforcement. During this time he celebrated the birth of his first and only child, a daughter.
After his retirement Richard continued with his lifelong love of riding motorcycles. He traveled all of the United States and even fulfilled his dream of going to Sturgus. Later he was given his most important role of “Pop Pop” and he absolutely loved his grandbabies.
Richard was preceeded in death by his mother and father. He is survived by his wife of 53 years, Mary Rountree; his daughter and son in law Christopher and Stephanie Grumbles of Bakersfield, California; his two brothers Walter Rountree and Mel Gosage, both of Porterville, California; his two loving grandchildren Jaidyn and Maison Grumbles, who were his pride and joy. He is also survived by numerous nieces and nephews and close family and friends.
At this time funeral services will be held for his immediate family only. For those who cannot attend his service, a live stream will be available on Greenlawn’s website.
Read Less

To send flowers to the family or plant a tree in memory of Richard Dale Rountree, please visit our Heartfelt Sympathies Store.

Receive notifications about information and event scheduling for Richard

We encourage you to share your most beloved memories of Richard here, so that the family and other loved ones can always see it. You can upload cherished photographs, or share your favorite stories, and can even comment on those shared by others. 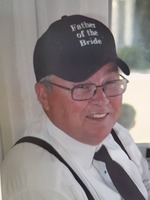