To share your memory on the wall of John Kidd, sign in using one of the following options:

Print
John Kidd came into this world on August 30, 1935, at his home in Taft, California. He lived in Taft most of his life except for a short while when his father worked for the military and the family moved to various places.

He attended T... Read More
John Kidd came into this world on August 30, 1935, at his home in Taft, California. He lived in Taft most of his life except for a short while when his father worked for the military and the family moved to various places.

He attended Taft schools through Taft College and then received his teaching degree and Masters from Fresno State University. After graduating, he married Judy Carlson, and they moved to Cuyama and began their teaching careers. John continued his education while he and the family spent summers at Fresno where he received his Administrative Credentials. He became the Superintendent of Cuyama School District where he was employed for seventeen years.

He and Judy have two sons, Craig Carlson Kidd and Christopher Collins Kidd. He was a wonderful father and spent much time with his boys at the family ranch in Cottonwood Canyon in Cuyama. That place was dear to his heart.

John had varied interests and talents. He also loved airplanes and made many models as a child which later developed into him becoming a pilot and building his own plane. This interest even carried over to Christopher who also became a pilot and built several planes. John enjoyed nature and the family spent time camping and water skiing at Mammoth Pools during summer vacations, often with friends. That was a place he also loved and enjoyed.

Providing good education for the children in Cuyama Valley was one of John’s main goals in life. I think most students who attended the schools under his guidance would feel he succeeded in doing that. He spent much time being with the students on the playground, in the cafeteria, coaching, driving the bus, and substituting rather than sitting in his office. He dearly loved the school and Cuyama Valley.

After retiring, John worked part-time in the oilfields where he could also see his boys every day. He did this until Judy retired, they did some traveling and spent more time at their place in Morro Bay where he also liked to go and cool off in the summertime. He and Judy purchased a home in Bakersfield in 2017 knowing the ranch where they lived in Cuyama was becoming too much work. On April 29, 2019, John became ill while they were moving to Bakersfield.

John was preceded in death by his parents, Albert and Bonnie Kidd; his brother, Abby Kidd; his aunts and uncles, Kay and Bessie, Cecil and Vivian Kidd; and his beloved son, Christopher Kidd.

He is survived by his wife, Judy Kidd; his son, Craig Kidd; his sister, Mary Kidd; his grandchildren, Sara, Cory, Jamie, and Nick as well as various cousins and their families.

There will be graveside services on Saturday, February 29, 2020, at 11:00 A.M. at the West Side District Cemetery, Taft, California. The family also wishes to thank Hoffmann Hospice Home for the wonderful care they provided for John and the family.

To send flowers to the family or plant a tree in memory of John Kidd, please visit our Heartfelt Sympathies Store.

We encourage you to share your most beloved memories of John here, so that the family and other loved ones can always see it. You can upload cherished photographs, or share your favorite stories, and can even comment on those shared by others.

Posted Mar 02, 2020 at 05:39pm
I was very sorry to learn that John had passed. I worked with him in Cuyama from 1982 to 1984. He hired me for my first full-time teaching position. My condolences go out to his family and especially to his wife, Judy. They were both so very kind to me and the other "newbies". John gave me my start in a long teaching career. I also met my husband and had my first daughter in Cuyama. Sometimes you do not know the lives you touch in this world.
With Kindest Regards to his Family,
Joanne Carrillo
Comment Share
Share via:
JH

You have my heartfelt condolence in your loss of John from this life. He was a pillar of my education in the seventh grade, and a good friend to me, for which I am forever grateful.

His rock solid teaching of math, reading, writing, science and history set the foundation for the wonderful education that I, and my classmates, enjoyed in the Cuyama Valley of the 1950’s.

John applied his interest in aviation to math problems as he was teaching, which inspired me to pursue and achieve my goals in a piloting and aircraft maintenance career.

He will be missed, and best described in this poem by John Gillespie Magee, Jr.


Oh! I have slipped the surly bonds of earth,
And danced the skies on laughter-silvered wings;
Sunward I've climbed, and joined the tumbling mirth
Of sun-split clouds, --and done a hundred things
You have not dreamed of --Wheeled and soared and swung
High in the sunlit silence. Hov'ring there
I've chased the shouting wind along, and flung
My eager craft through footless halls of air...
Up, up the long, delirious, burning blue
I've topped the wind-swept heights with easy grace
Where never lark or even eagle flew --
And, while with silent lifting mind I've trod
The high untrespassed sanctity of space,
Put out my hand, and touched the face of God.

Flowers were purchased for the family of John Kidd. Send Flowers

Sweet Tranquility Basket was purchased for the family of John Kidd. Send Flowers

Posted Feb 25, 2020 at 04:45pm
He was so tall and seemed strong and powerful. He was a caring teacher. He was teaching fifth grade when we came to Cuyama from Iraq in the 1960s... I was in sixth grade when my best friend, Shannon Fletcher would want to go and "bug" Mr. Kidd. He would tease us and he was fun. I remember being half afraid of him as he would have kids who got in trouble stand by the wall with their arms outstretched until they were done with their time. (Their arms were shaking but they could not drop...) We (the Jensen's) lived a few houses down from John and Judy. They were always fun and supported anything going on with the school. They were great neighbors...We got caught once as we had been swimming and hanging out in back yards but being too noisy...We were caught and it was scary but he never ratted us out, as far as I know...We would have been grounded for life! He was a respected teacher and loved by everyone who I knew...RIP, Mr. Kidd. Nina (Jensen) Trainor
Comment Share
Share via: 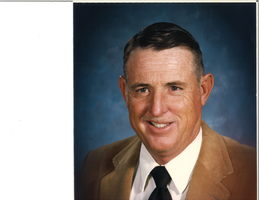