To share your memory on the wall of Anthony Noce, sign in using one of the following options:

Tony was born and raised a California native. He was employed as a union teamster in his early years and later became a union licensed general contr... Read More
OBITUARY

Tony was born and raised a California native. He was employed as a union teamster in his early years and later became a union licensed general contractor. For over 25 years, he worked on construction projects throughout California, Utah, and Hawaii. When he wasn’t working, he participated in Boy Scouts, the LDS church, and Indian Y Guides, and he was a coach for the Police Athletic League, Pop Warner football, and little league baseball. He retired from construction work in 1991, when he moved to Bakersfield, Ca; though he never truly understood what “retirement” meant.

In Bakersfield, he volunteered at libraries and opened his bookstore. He was an APA pool league member, a Bakersfield Police Department Citizen Academy graduate, and was active in the Kern County Long-term Care Ombudsman and Bakersfield Historic Preservation Commission. He served as a jury member on multiple trials in Kern County and became deeply involved in the Kern County Grand Jury and California State Grand Jury Association, serving for many years.

When he wasn’t volunteering, he enjoyed reading, writing, woodcraft, and making his never-ending list of home improvement projects even longer. He continued to enjoy billiards and became the family genealogist with over 5000 people in his files. The LDS Church was near to his heart, and he served his Brothers and Sisters in the Church as much as he could. He leaves his large family and friends a lifetime of memories of love, support, guidance and special times together.

He is survived by his wife, Jeri; his brothers, Dan and Mike; his children, Rosemary, Mark Vincent, Jason, Mark Gowen, Laura, Donna, Kenny, and Billy. He is also survived by six grandchildren, two great-grandchildren, and numerous nieces, nephews, cousins, and friends.

He is preceded in death by his parents, Leroy and Irene; his brother, Steve; and his sister, Diane.
Read Less

To send flowers to the family or plant a tree in memory of Anthony William Noce, please visit our Heartfelt Sympathies Store.

We encourage you to share your most beloved memories of Anthony here, so that the family and other loved ones can always see it. You can upload cherished photographs, or share your favorite stories, and can even comment on those shared by others.

The SLV Noce/Dagan/Welsh family's and Lori Steifle have sent flowers to the family of Anthony William Noce.
Show you care by sending flowers

Posted Mar 05, 2020 at 04:46pm
He was the best story teller in the family! He could keep the group laughing for hours. We will miss his spirit. His dry sense of humor and of course his diligent attention to all of our genealogy . Happy that he is now at peace.
Comment Share
Share via:
HS

The SLV Noce/Dagan/Welsh family's purchased the Large Basket Garden and planted a memorial tree for the family of Anthony Noce. Send Flowers

Lori Steifle purchased the Love's Journey and planted a memorial tree for the family of Anthony Noce. Send Flowers

Serenity Wreath was purchased for the family of Anthony Noce. Send Flowers 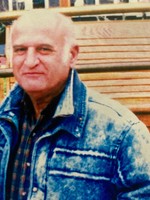