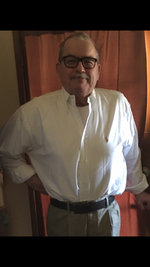 Sam Bedingfield
February 2, 1954-October 27, 2020
Samuel Grant Bedingfield passed away on October 27 at the age of 66. He is predeceased by his mother and father, Shirley and John Wayne Bedingfield. Sam is survived by his loving wife of 44 years, Dell; sons, Josh and Brock; daughter, Anabel; brother, John and his wife, Kay; sister, Cheryl Bender and her husband Scott; sister-in-law, Jade Pyle; grandsons, Brock Jr. and Ivan; and numerous nieces and nephews.
Sam was born in Chickasha, OK on February 2, 1954. He graduated from West High, where he was class president and a star running back, among other achievements. He would continue his academic and athletic careers at the Air Force Academy, UCLA and CSU Long Beach, where he met and fell in love with his wife.
In his youth, Sam played football, rugby, baseball, ran track and wrestled. He even competed in Europe with the CSULB rugby team.
Sam worked in numerous fields including: driving trucks for Pepsi, handling baggage for Air Catalina, sold extended warranties for electronics, manager at Big 5 Sporting Goods and finally his own management consulting service. He was also the president of Southwest baseball for several years in the 1990s.
In more recent years, he enjoyed watching his grandsons play sports and spending time with them, talking about sports with his sons and his wife about their days, watching American Pickers and worshipping the Lord at Discovery Church followed by breakfast with family at La Cabaña.
Viewing will be on Thursday, November 5 from 9:00 to 11:00 AM at Greenlawn Funeral Home SW in the Main Chapel, Building A and will be followed by the burial ceremony 12:30 PM at Bakersfield National Cemetery. Graveside space will be limited to immediate family due to social distancing guidelines. For others, there will be viewing space nearby. Please be kind and wear your masks at both services.