To share your memory on the wall of Rosa Abarca, sign in using one of the following options:

Provide comfort for the family of Rosa Abarca with a meaningful gesture of sympathy.

Print
Rosemary Abarca, Attorney at Law, 68, passed away in Bakersfield, California with her sons by her side on May the 2nd 2020 due to complications from cancer.

Rosemary was born in Zamora, Mexico in December of 1951 to parents Jose de Jesus... Read More
Rosemary Abarca, Attorney at Law, 68, passed away in Bakersfield, California with her sons by her side on May the 2nd 2020 due to complications from cancer.

Rosemary was born in Zamora, Mexico in December of 1951 to parents Jose de Jesus Abarca and Maria Elena Abarca. After immigrating to the United States with her parents and siblings, Rosemary arrived in Kern County in 1963. After graduating from Bakersfield High School, she went on to earn her bachelor’s degree from the University of California San Diego and her juris doctor from California Western School of Law. Rosemary was admitted to the State Bar of California in 1981 and practiced law in Kern County for nearly forty years specializing in Social Security Disability.

Throughout her life, Rosemary maintained her strong Catholic faith and was very active in the local community, volunteering at various churches including St. Francis and St. Philip’s. Rosemary was well versed in the world, having traveled across the globe on multiple pilgrimages with fellow members of the church. She believed fully in helping others and spreading a message of kindness and compassion. Guided by her faith, Rosemary started a family, giving birth to her first son, Rigoberto Abarca Vindiola, in 1982 and second son, Christopher Abarca Vindiola, in 1986.

Rosemary is survived by her two sons, as well as her sisters Lucille, Teresa, Lilia, Lolita, Susanna, and her brothers Jesse and Manuel, along with many nieces and nephews. She is preceded in death by her parents Jesus and Elena, as well as her brother Jose Luis.

In lieu of flowers, donations may be made to St. Francis Church or the American Cancer Society. A private service has already been held at Greenlawn Cemetery Northeast, but a public memorial may be held at a later date.
Read Less

To send flowers to the family or plant a tree in memory of Rosa Maria Abarca, please visit our Heartfelt Sympathies Store.

Receive notifications about information and event scheduling for Rosa

We encourage you to share your most beloved memories of Rosa here, so that the family and other loved ones can always see it. You can upload cherished photographs, or share your favorite stories, and can even comment on those shared by others.

Posted May 14, 2020 at 11:48am
Very sorry for your loss, Rigo and Chris and all the family. She was a wonderful, generous, fun-loving, and prayerful friend.
Donna Miller
Comment Share
Share via:
DR

Posted May 13, 2020 at 07:18pm
Our sincerest heartfelt sympathy to you Rigo and Christopher in the loss of your dear Mother. Know that you are in our thoughts and prayers!
Dee and Ken Rhodes
Comment Share
Share via:
BS

Flowers were purchased and a memorial tree planted for the family of Rosa Abarca. Send Flowers 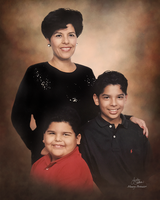