To share your memory on the wall of Paulette Wren, sign in using one of the following options:

Print
On Saturday, August 29th 2020, Paulette Ann Wren, passed away and returned to her heavenly home. She was 75 years old.

Paulette (Pauly) was born on September 5th 1944 in Hardin, Montana to William Fredrick Guptill and Mildred Eloise Ques... Read More
On Saturday, August 29th 2020, Paulette Ann Wren, passed away and returned to her heavenly home. She was 75 years old.

Paulette (Pauly) was born on September 5th 1944 in Hardin, Montana to William Fredrick Guptill and Mildred Eloise Quest Guptill Lind. Growing up, she enjoyed spending time outdoors with her family, specifically her cousins. She had many fond memories of their time together, including lots of shenanigans. She also had a love of horses, especially her Flicka. She spoke often of their adventures together. She learned at an early age how to work hard, both on the ranch where they lived and in school, which is something that benefited her throughout life. She graduated from Hardin High School in 1962.

After graduating, Pauly began waiting tables at a local restaurant where she met her husband William Kenneth Wren. Pauly and Bill moved to Salt Lake City where they raised three children, Scott, John, and Leasa. While in Salt Lake, Pauly and her family joined the Church of Jesus Christ of Latter-day Saints. As with all things Pauly did, she took an active role in the Church, serving in many capacities. One of her favorites was as a counselor in the Young Women’s program. In 1984, Pauly and her family moved to Bakersfield, California. In Bakersfield, Pauly started her legal career – starting as a legal secretary until becoming a law office manager at a premier law firm in Bakersfield. In conjunction with managing a law firm, Pauly also played an integral role in the Kern County Law Enforcement Foundation; coordinating fundraisers, dinner events, and awards. Many would say that Pauly was the heart of the organization.

Beyond Pauly’s exceptional legacy of service and career success, Pauly was also known for her dedication to family. As a young mother, Pauly would single-handedly tend to all of the family affairs while her husband was away for extended business trips; as a grandmother she would attend not just her grandchildren’s birthday parties but their sporting and extra-curricular activities as well; as a great-grandmother, she made concerted efforts to spend time with her great grandchildren despite the extraordinary difficulty she had traveling. Indeed, Pauly lived life to the fullest. She was a beautiful woman with a radiant smile and a heart of gold, always wanting to help those around her.

Pauly was preceded in death by her father, William (Fred) Guptill, her mother, Mildred Eloise Quest Guptill Lind, her husband, William (Bill) Wren, her son, Scott Harsch, and her son, John Wren. Pauly is survived by her daughter, Leasa Arvig (Chris); her grandchildren, Kyle (Amanda), Dylan (Jessica), Gader (Krystal), Gunner, Natalie, Hunter (Sophia), Ty, and Hayden; her great grandchildren, Declan, Gabriel, and Sebastian; her daughters-in-law, Kelly (Don) and Marina; her brother Monte; and a host of other family members. Pauly will certainly be missed by her family and many friends, but all can take comfort in knowing that through God’s plan, families are forever.
A private family graveside service will take place in Bakersfield, California. In lieu of flowers, Pauly requested that donations be made to the John Wren Memorial Scholarship fund in her honor. To make a donation please contact Noreen Mills at (661) 319-7203.
Read Less

To send flowers to the family or plant a tree in memory of Paulette Ann Wren, please visit our Heartfelt Sympathies Store.

Receive notifications about information and event scheduling for Paulette

There are no events scheduled. You can still show your support by sending flowers directly to the family, or planting a memorial tree in memory of Paulette Ann Wren.
Visit the Heartfelt Sympathies Store

We encourage you to share your most beloved memories of Paulette here, so that the family and other loved ones can always see it. You can upload cherished photographs, or share your favorite stories, and can even comment on those shared by others.

Posted Sep 04, 2020 at 02:53am
One of my favorite memories of Paulette was when I went to stay with her when she lived in Grandpa Quest's home. That year she had decided to raise a steer for 4H. We went to the fair in Hardin and took her prized steer. Since I was raised in a small town called Hysham, I had no idea what was needed to make this prize steer ready! I can't remember how many days we were there, but I know we carefully fed this animal just the right mix of food! Then we cleaned his stall which was a really smelly event each day! We carefully gave it a bath every day and combed its hair so that it was wavy reddish brown. Then came the brushing of the tail and carefully caring for the hooves. It was a big event! I watched those who had brought sheep to the fair use a special comb to make them look like puffy pillows. Everyone enjoyed the teasing comments, the fair rides and especially the fair food!! Finally the big day arrived and Paulette proudly led her steer around the ring! She got a red ribbon and was very excited. Then she realized her pet steer that she had loved and cared for was sold. That's when the tears began. I hugged her and we both agreed it was a great part of our summer. I think we both learned a lot! Love you dear cousin!! Hugs Suzann Quale

Paulie was my closest and dearest friend. We shared so much. She was my sister, not just my friend. We shared our happiest days and our saddest days. She would go camping with us and to visit my brother in Bass Lake. Paulie was the kindest, sweetest and most giving person I have known. Never an unkind word about anyone. We went to see Dr. Phil show and got front row seats. We laughed at the lunch we got and decided who was really the problem before Dr. Phil did. There's too any memories to share them all, We had each other's back with work at the law office. There aren't enough words for me to explain how much Paulie meant to me. How much I missed her and always will. 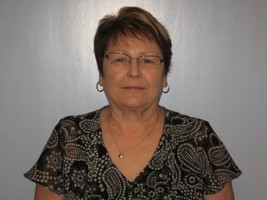