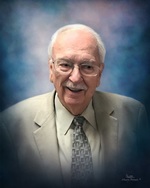 Our family has suffered a great loss. Lindel Smith passed away on November 12th, 2020 at the age of 87. Lindel was born in Marlow, Oklahoma to Harty and Emily Smith. In grade school the family moved to Ada, Oklahoma. Upon graduating from Ada High School he enrolled at East Central State College. As a freshman, Lindel was drafted into the Army and stationed in Germany. After serving his country he returned to East Central State College earning a Masters Degree in Education. Lindel started his teaching career in Bowlegs Oklahoma before moving, with wife Drew Lynn, their family to Bakersfield in 1960. Lindel was employed by the Bakersfield City School District, holding positions of: Teacher, Counselor, Principal, Administrator; concluding his career as Personnel Director.
As one of the founding members of the Westside Church of Christ, Lindel served in many capacities: Teacher, Elder and loyal faithful servant.
He is survived by his wife of 65 years Drew Lynn, daughter Laura (Robert), son Terry. Five grandchildren, Nick, Kelsey (Daniel), Emily (Joshua), Lindsey, Whitney (Harrison). Three great grandchildren, Cason Trevor and Felicity.
He was preceded in death by his parents Harty and Emily, brother Elmer, son Brad and his dog Spike. Due to Covid 19 there will be, a private family only service, with a celebration of life at a later date.