To share your memory on the wall of Larry Davis, sign in using one of the following options:

Larry was born in Celina, Texas on April 5, 1946. He was the second son to James and Florence Davis. As a young child, the family relocated to Santa Paula, CA.. Larry grew u... Read More
LARRY LANE DAVIS, 74, June 26, 2020, Bakersfield, California

Larry was born in Celina, Texas on April 5, 1946. He was the second son to James and Florence Davis. As a young child, the family relocated to Santa Paula, CA.. Larry grew up in Santa Paula, very active in athletics and school activities. Larry idolized his older brother, Tommy, who was 11 years older. Larry was drafted into the Army to go to Vietnam in 1965. Larry enrolled in the flight program (even though he was several inches over the height limit). After flight school graduation he was sent to Vietnam.

Larry flew reconnaisance in a single engine plane called a Bird Dog. He flew many missions as he directed ground fire to specific enemy locations, and also directed war ships off the coast. On April 1, 1969 Larry’s plane was shot down over the jungle just after he located a large ammunition bunker being held by the VietCong. Just before going down, Larry was able to direct fire and had the bunker destroyed. His observer dragged him out of the plane and went for help. Larry was rescued under fire by helicopter. Larry was awarded a Purple Heart and three Bronze Stars

After the plane crash, Larry was sent first to Japan for immediate surgery to repair a badly injured knee and arm. Next he arrived in the States for an 11-month stay for multiple surgeries. While home on convalescent leave he went on a blind date with Sharon, a woman introduced by friends. A year later, in 1970, they were married and made their home in Bakersfield, CA. Sharon was the love of his life. Larry adopted her three sons. Larry was truly a family man and was very close to his parents and his brother. He and Sharon were to celebrate fifty years of marriage on November 27, 2020.

Larry had a very successful career in Human Resources, working in banking and trucking.

Larry is preceded in death by his parents, his brother Tommy and his nephew Mark Davis. He leaves behind his wife Sharon and their three sons: Derek (wife Jenny), David and Jay.

Graveside services will be held at the National Veteran’s Cemetery in Arvin on Thursday, July 9, 2020. Due to Covid-19, the services are limited to immediate family. A gathering of family and friends will be held immediately following the service at a close friend’s home.
Read Less

To send flowers to the family or plant a tree in memory of Larry Lane Davis, please visit our Heartfelt Sympathies Store.

Receive notifications about information and event scheduling for Larry

There are no events scheduled. You can still show your support by sending flowers directly to the family, or planting a memorial tree in memory of Larry Lane Davis.
Visit the Heartfelt Sympathies Store

We encourage you to share your most beloved memories of Larry here, so that the family and other loved ones can always see it. You can upload cherished photographs, or share your favorite stories, and can even comment on those shared by others.

Posted Jul 08, 2020 at 11:02pm
Kent Seibly has so many fond memories of Larry on the golf course and of time shared with Sharon. My heartfelt condolences to Sharon and the boys.
Comment Share
Share via:
JD

Posted Jul 08, 2020 at 06:04pm
May you be comforted by the outpouring of love surrounding you. Peace, prayers and blessings. With love and hugs.

Posted Jul 06, 2020 at 06:54pm
For anyone reading this that was not really close to our fabulous Uncle Larry, you don't know what you have missed. To see him a man of large stature but was like a teddy bear with a heart of gold. His sense of humor was none stop. You could tell he was serious about a conversation by the look on his face. Our hearts are broke at the loss of the wonderful man but know he is that very special angel. Oh what a reunion in heaven with all his family & in laws, it is probably a good thing we can't see that!!!!! All our prayers & love to Aunt Sharon & the boys. To Uncle Larry thank you for all the wonderful memories on our trips to visit you. You will always be in our hearts. Allen & Lisa Anders - Missouri
Comment Share
Share via:
SF

Posted Jul 06, 2020 at 05:35pm
Larry was my father's best friend for many, many, years. They were also serious golf buddies.
After my dad passed, Larry told my daughter and myself that we were now his family and he always made us feel so special to him. He was the kindest man with the greatest smile on this earth. And we will truly miss him.
Sherry and Alyssa Florence

We send our love to Sharon and their sons. The love he had for his wife and boys was like no other. 💙🕊💙

Uncle Larry was a special man. He really cared about all of us. Our visits with him and Aunt Sharon was always wonderful!! We will really miss him!! Heaven gained another angel!!
JD

Uncle Larry was a special man. He really cared about all of us. Our visits with him and Aunt Sharon was always wonderful!! We will really miss him!! Heaven gained another angel!! 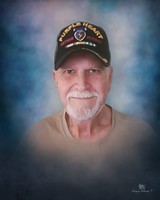