To share your memory on the wall of John Wilke II, sign in using one of the following options:

John passed away peacefully in his sleep with his son, John, and daughter-in-law, Savonna, by his side. He died in the house he grew up in, after suffering from the effects of Parkinson’s Disease for at least the last three years of his life.
John moved to his beloved Thunderbird Ranch after his high school graduation in 1958, and carved out a life and a family. He was a brilliant man, teaching himself everything he needed to know to operate a ranch. There was never a thing that he couldn’t fix or make. If a neighbor was ever in need of anything and couldn’t do it themselves, they were told to “ask John Wilke”.
In addition to raising and selling alfalfa and cattle, John was well-respected contractor within the Forest Service, state, and county communities. He contracted out his infamous, self-built, 2000-gallon, 10-wheeled drive water truck that he enthusiastically transformed from a 1958 Army deuce-and-a half. He was also a masterful, large equipment operator. At 67 years old, John was still asked to cut fire line.
He was a mild and patient “teacher” to his children and grandchildren, whom he dearly loved.
John is preceded in death by his wife, Patricia (died 1992), his parents John and Margaret, a sister, and a brother. He leaves his legacy to be carried on by his children: Theresa (Mike), Mary, Johnny (Savonna), and Danny (Jenny); his ten grandchildren: Joseph (Morgan), Ryan, Caitlyn (Ethan), Sarah (Jesse), Tyler (Haley), Patrick (Teighlor), Nathan, Johanna, Justin, and Morgan; and his six great-grandchildren: Logan, Raelynn, Kinley, Levi, Ellie, and Rhett. He also leaves behind a treasured companion, Janice.

John loved it when family and friends got together, playing chess, and playing “31”. So in lieu of flowers, please treat yourself to a night of good, quality cheer in his honor.
The Memorial Mass will be held at St. Mary’s, in Taft, on Friday, March 27th. Rosary will be prayed at 12:30pm, with the Memorial following at 1:00pm. Reception following at OT’s Restaurant form 2:00 – 4:00 PM.
Read Less

To send flowers to the family or plant a tree in memory of John Waldo Wilke II, please visit our Heartfelt Sympathies Store.

We encourage you to share your most beloved memories of John here, so that the family and other loved ones can always see it. You can upload cherished photographs, or share your favorite stories, and can even comment on those shared by others.

Posted Feb 24, 2020 at 09:00am
So sorry for your loss. I will keep the family in my prays.
Love and GOD Bless you!
Sondra, Alfred, and John
Comment Share
Share via: 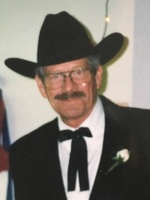