To share your memory on the wall of James Harris, sign in using one of the following options:

He is proceeded in death by his mother and father, his step-father, Harold Johnson, sisters, Laura McLaurin and Juanita Harris and his brothers, Melvin Harris and Kenneth Harris.
His family made the long arduous trip from Mississippi to California when James was still a very young child. They settled in Bakersfield CA where he grew from a child to adulthood. He attended and graduated from Bakersfield High School in May 1979. During his high school years he was an outstanding athlete in the sport of Handball and won several awards. At one time, James toyed with the idea and possibility of becoming an Olympic Athlete.

James, during his youth, he was affectionately known as ‘Hamburger’ a nickname bestowed on him by his stepfather. James enjoyed family gatherings but preferred his own company, living life according to his desires and choices. He loved to cook and tinker around his home. Even as he got older with severely failing eyesight, James could be counted on for a laugh and belly chuckle.

James was not a man of tears, nor a man of sadness. He took what life handed him in stride.

When you remember James, remember him as he lived.
Read Less

To send flowers to the family or plant a tree in memory of James Calvin Harris, please visit our Heartfelt Sympathies Store.

Receive notifications about information and event scheduling for James

We encourage you to share your most beloved memories of James here, so that the family and other loved ones can always see it. You can upload cherished photographs, or share your favorite stories, and can even comment on those shared by others. 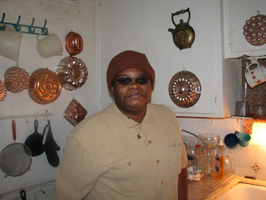