To share your memory on the wall of Jack Cantrell , sign in using one of the following options:

Print
JACK L. CANTRELL
October 29, 1928 - August 17, 2020
Jack L. Cantrell passed away on August 17, 2020.
Named for Jack Dempsey, he burst onto the world stage October 29, 1928 to proud parents Jesse and Edith Cantrell and older brother ... Read More
JACK L. CANTRELL
October 29, 1928 - August 17, 2020
Jack L. Cantrell passed away on August 17, 2020.
Named for Jack Dempsey, he burst onto the world stage October 29, 1928 to proud parents Jesse and Edith Cantrell and older brother Donald. As he would say about his birthday, "I crashed in '28 and the market crashed in '29".
His joys, gifts and milestones along the way were many during his long and happy life. Raised in Casper, Wyoming, he was a proud alumnus of the University of Wyoming and the University of Colorado at Greeley with a postgraduate degree in Education. He served as a Lieutenant in the Korean War as an intelligence officer with the Air Force.
He taught social studies, was a counselor and coached track, basketball and tennis for over 30 years at East Bakersfield High School. (Go Blades!) He was inducted into the EB Hall of Fame in 2014.
Starting in 1959, he was a participant in the Kern County Tennis Championships for the next 40 years.
Jack used his love of teaching to share the gospel at Our Savior's Lutheran Church and Emmanuel Lutheran Church by teaching Sunday School for 50 years. He sang and entertained family and friends throughout his life. Music was his joy and leading community sing-alongs was his talent. Beginning in Yellowstone in 1948, he directed community singing for guests, Sunday School openings and for 40 years played his guitar for the elderly once a month at Manor Inn. Consistency and loyalty were among his gifts.
Jack's joys were many. More than anything else, Jack was blessed by the friendship of many people. He appreciated the camaraderie and competition of his fellow members of the Bakersfield Racquet Club. He loved his colleagues and the East High family and thoroughly enjoyed seeing former students and recounting their time together. He truly valued his friends at 24 Hour Fitness (a member for over 30 years) who made exercise good for soul and body. He had terrific neighbors who were always good for a chat. God blessed him with a supportive church family who had a tremendous impact on his spiritual life. The lifelong friendship with Laddie Kumelos was one of his greatest joys.
He had many jewels in the crown of life. Carolyn Hamilton who he met and married quickly (3 dates). They enjoyed 40 years together until her passing in 1999. He leaves behind to cherish his memory Andy (Judy) Mallory (Joel) Emily (Michael) Ellen and Wyatt, Robin (Steve) and Jay and the apples of his eye, his great grandchildren, Jude, Jack and Paige. Also, his cousin Rich, his sister-in-law Betty Lou Cantrell, nieces Natalie, Mary, Linda, Susan, Polly and nephews David and Robert and all their families.
And last of all, a gift of love that was given to him in the last chapter of his life from Jeanette Kuster (nee Bloker) married for 20 years this August.
Jack would want you to know as you are reading his final send off, that he is among the saints of Heaven today, not because he was a good man, a good teacher, a good father, a good friend and a good husband (and he was all of those things) but because of the sacrifice given by our Lord and Savior Jesus Christ who died that all people who believe in him, will be with him someday in that "home not made with hands".
In lieu of flowers, donations may be made to Emmanuel Lutheran Church, 1900 Baker St. 93305 or the Jack Cantrell Memorial Scholarship Fund at East Bakersfield High, Stephanie_memering@kernhigh.org Due to Covid19, a memorial service will not be held at this time.
Read Less

To send flowers to the family or plant a tree in memory of Jack Loren Cantrell , please visit our Heartfelt Sympathies Store.

Receive notifications about information and event scheduling for Jack

There are no events scheduled. You can still show your support by sending flowers directly to the family, or planting a memorial tree in memory of Jack Loren Cantrell .
Visit the Heartfelt Sympathies Store

We encourage you to share your most beloved memories of Jack here, so that the family and other loved ones can always see it. You can upload cherished photographs, or share your favorite stories, and can even comment on those shared by others. 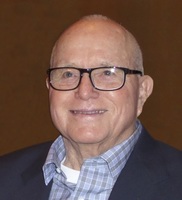