To share your memory on the wall of Harold Perry, sign in using one of the following options:

Harold was born in De Queen Arkansas on July 28, 1931. The Perry family moved to McFarland, CA when he was 8 years old and grew up in a small two-bedroom house with seven brothers and sisters.

He was drafted during the Korean War and after returning home went back to work for the Kern County Fire Department. He retired in 1986 and has enjoyed his retirement fully.

Harold married the love of his life Georgia Rush in 1955 and they had three children. Harold Ray (Tab) Perry, Kelly (Tim) Whitaker and Julie (Steve) Zumwalt. He has 8 grandchildren and 6 great grandchildren.

He now will be reunited with his wife Georgia who preceded him in death in 2012. He missed her terribly and did his best to stay busy with his many hobbies and enjoying his antique cars and going to car shows. He played a pivotal role in the inauguration of the Kern County Gun Club and was an avid Trap and Skeet shooter and was at one time state champion.

His graveside funeral is scheduled for 9:00am on Friday 28, 2020 at Greenlawn Southwest Mortuary, 2739 Panama Lane, Bakersfield, CA 93313. Due to the Corvid 19 pandemic, there will not be a reception scheduled at this time.
We LOVE YOU POP and will miss your deeply.
Read Less

To send flowers to the family or plant a tree in memory of Harold Loyd Perry, please visit our Heartfelt Sympathies Store.

Receive notifications about information and event scheduling for Harold

The insignias listed here may be subject to copyright and/or trademarked. Those copyrights and trademarks are owned by the respective organizations.

We encourage you to share your most beloved memories of Harold here, so that the family and other loved ones can always see it. You can upload cherished photographs, or share your favorite stories, and can even comment on those shared by others. 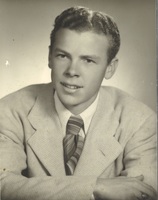