To share your memory on the wall of Gladys Dunlap, sign in using one of the following options:

Gladys met the love of her life, Omer “Dewey” Dunlap, a “Flyboy” who was stationed at a nearby Air Force Base. They were married July 3, 1954, and welcomed a daughter, Audrey, a year later. In 1957 Gladys moved to Kern County, California, with her husband and daughter. To say she experienced “culture shock” is an understatement. Having never met a Protestant before, Gladys was surprised to discover they were just like Catholics! She quickly adapted to her new home and began making life-long friends, even though she greatly missed her parents. Dewey, Gladys, and Audrey eventually settled in Bakersfield where their son, David, was born in 1959. She lived in Bakersfield for the rest of her life.

Together Gladys and Dewey worked hard to provide the best life possible for their children; he as a welder for Chevron and she as a homemaker. They lived frugally to send Audrey and David to St. Francis Parochial School, fulfilling a promise Gladys made to her parents.

Gladys cherished her role as wife and mother. She quickly learned to cook her husband’s favorite foods in a cast iron skillet, often accompanied by country gravy and biscuits (the homemade kind!), and dinner was always on the table at 5 p.m. Using her mother’s recipes, Gladys perfected her pie making skills, and her chocolate chip cookies were the BEST!
She was devoted to her children. During their formative years she read books to them; taught them to pray; took them to Church every Sunday; helped with their homework; played board games with them; and attended cheer and sporting events, all while modeling the virtues of love, empathy, compassion and forgiveness. Gladys was an important part of her adult children’s lives. Nothing made her happier than making chocolate chip cookies and tacos for David when he came home for a visit.

In 1979, Gladys became a grandmother to Alison, followed by Monica and Matthew. She adored her grandchildren, and they adored her. When they were small, she spent countless hours nurturing and spoiling them. As they grew, she attended their musical performances and sporting events, bursting with pride. She had a special relationship with each of her grandchildren and loved them deeply. Gladys was blessed with seven (number eight on the way) great-grandchildren. They brought sweet joy into her heart.

Gladys and Dewey greatly enjoyed their retirement years. They bought a motorhome and spent summers in Crescent City, California and winters in Puerto Penasco, Mexico. Dewey went fishing while Gladys socialized. Together they enjoyed daily “Happy Hour” with new groups of friends at each location. Gladys, with her outgoing personality, made dear friends everywhere she went.

Gladys’ journey on this earth was one of service to others. She was an active member of St. Francis Parish for 60 plus years, volunteering at both the school and church. She was a member of the Altar Society where she selflessly did any task asked of her, and in her later years, she joined the Golden Agers which enabled her to keep in touch with loving friends. She also volunteered weekly to help Audrey’s first grade students in art centers where she delighted in interacting with the children. Probably the biggest impact of Gladys’ life was the way she reached out and cared for anyone who was hurting. She was loved by so many who were touched by her joyful and selfless heart.

Gladys was preceded in death by her parents, Annie and Albert Pelletier; her loving husband of almost 65 years, Dewey Dunlap; her brother and sister-in-law, Clarence and Sue Pelletier; her sweet niece, Shirley Shackelford; and many aunts, uncles, in-laws, and cousins.

Gladys lived her faith, and prayer was a daily part of her life. She prayed daily for family, friends, and those in need. She especially loved and prayed for Joanne Weaver.

Gladys was blessed with loving caregivers during her journey, including Bea, Carolina, and Sally at Spruce Gardens; staff at Summit Hills; caregiver Vicki; and caregiver Alma, whose compassionate care during Mom’s final weeks will never be forgotten. Thank you to Purpose Driven Health Care and Hoffman Hospice. We are forever grateful.

A viewing for friends and relatives will be held at Greenlawn Funeral Home Northeast, 3700 River Boulevard on Sunday, August 30th from 12 to 2 p.m. Funeral services will be private. A celebration of Mom’s life will be held when possible.

Children held a special place in Mom's heart. In lieu of flowers, donations may be made to CASA of Kern County or the charity of your choice.
Read Less

To send flowers to the family or plant a tree in memory of Gladys Greta Dunlap, please visit our Heartfelt Sympathies Store.

Receive notifications about information and event scheduling for Gladys

There are no events scheduled. You can still show your support by sending flowers directly to the family, or planting a memorial tree in memory of Gladys Greta Dunlap.
Visit the Heartfelt Sympathies Store

We encourage you to share your most beloved memories of Gladys here, so that the family and other loved ones can always see it. You can upload cherished photographs, or share your favorite stories, and can even comment on those shared by others. 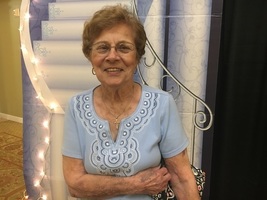