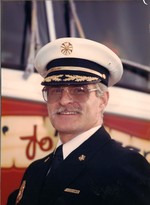 Our wonderful husband, father and grandfather, Dennis Stewart Needham, was received into the arms of our Lord on Sunday, November 8, 2020 at the age of 82. Known to many people as Denny, he was born in Taft, C.A., where he spent his younger years living with his parents, Joe and Susie Needham, and his beloved Pop Needham. They eventually moved to Bakersfield where Denny was in the first graduating class of North High and was a proud North High Star. After high school he met his lovely wife to be, Carmen. Together they made a life in Bakersfield. Denny was in the Marine Reserves from 1956 to mid-1963. He was hired by Bakersfield City Fire Department in March of 1960. He rose through the ranks to eventually be the youngest chief to be appointed in April of 1976. Denny led the department forward from manual communication into the age of computers affecting every facet of the department, which was an exciting era. He retired in May of 1991, after 31 years of service, 15 of those as the Chief. He was dedicated to the Bakersfield City Fire Department.
Denny had many interests in retirement. He loved to carve wood, design and build birdhouses, design and build furniture, all of which his family and friends treasure. In his later years he enjoyed the Iconography Painting Class at Mercy Hospital, and all of the friends he made there.
Denny was a dedicated family man, known for his leadership, integrity, determination and sense of humor. He was our beloved patriarch, always wanting to take care of his family. He is survived by his wife of 62 years, Carmen. Two daughters, Mende Silva and Margo and husband Mike Virden of VA. Grandchildren, Eric and Shannon Silva, Emily and Steven Easterby, Alexander Morze and Mairi Morze, Sister-in-law Robbi Needham, with the first great-granddaughter Easterby due early next year, which Denny looked forward to with great anticipation. He is pre-deceased by his parents and brother, Douglas Needham.
In lieu of flowers, memorial donations can be made in Denny’s honor to: Bakersfield Firefighter’s Burn Foundation: P.O. Box 2393, Bakersfield C.A. 93303, Bakersfield Firefighter’s Historical Society: P.O. Box 78191, Bakersfield, CA 93311 and St. Jude Children’s Research Hospital: 501 St. Jude Place, Memphis, TN 38105.