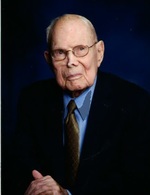 Alvin Almgren passed away at home on May 10, 2020, at the age of 100. Al was born in Bakersfield, California on February 23, 1920. His father, Claus Gustav "C.G." Almgren was an immigrant from Sweden who moved to Bakersfield in 1905. His mother, Anna Almgren was the daughter of Orlander and Josephine Olson, also immigrants from Sweden, who moved to Bakersfield in 1910.
Alvin attended local schools and graduated from UCLA in 1944 with a B.A. degree in geology. This was followed by military service in the Army in the European theater during VIM/ II, 1944-1946. After his military service, Al returned to Bakersfield where he began a career in the petroleum industry that lasted over 70 years. He was employed by the Superior Oil Co. as a micro-paleontologist from 1946-1959, and by the Union Oil Co. as a micro-paleontologist and geologist from 1959-1986. From 1986-2018, until the age of 98, he continued working as a consulting micro-paleontologist and geologist for the petroleum industry.
During his career, he published thirteen paleontological and geological papers on fossil foraminifera and the stratigraphy of sediments in the San Joaquin and Sacramento Valleys of California. For over 65 years he was a member of the American Association of Petroleum Geologists. He was a past president of the Pacific Section Society of Economic Paleontologists and Mineralogists (1962) and elected to Honorary Membership in that same society in 1979. He was a past president of the San Joaquin Geological Society, received the President's Award of the Pacific Section American Association of Petroleum Geologists in 2010, and Honorary Life Membership in that association in 2013.
On June 29, 1941, Al married Erva Bernice White, also a native of Bakersfield. They were blessed with three fine sons, Gerald, Darrell, (who passed away in 2014), and John. They enjoyed almost 70 years of happy married life until Erva's passing in 2010.
Alvin"s desire in life was to exemplify the teachings of Christ. He first attended the Bakersfield First Church of the Nazarene at two weeks of age with his parents and brothers, accepted Christ as his Savior at the age of eight, and later became a member of the church. He was very active in the church throughout his lifetime, serving in various capacities of leadership for many years including church board member, Sunday School Superintendent, and building committee member. Al, his wife Erva, and their three sons were active and supportive members of the church and its cause to present the gospel of Christ. In recent months Al still attended church when possible and last attended on his 100th birthday, February 23, 2020. He was a true man of God, with integrity and humility, and will be missed by all who knew him.
Alvin is survived by his two sons, Gerald Almgren and wife Betty of Bakersfield, John Almgren of Bakersfield; his sister-in-law, Wanda Almgren of San Diego; grandchildren, Julie Gentry of Bakersfield, Teena Lawson of Harrison, Montana, Darrell S. Almgren of San Bernadino; six great-grandchildren, four great-great-grandchildren and several nieces including Myrna Almgren May, Sharon Garner, Donna Dullum, LaVerne Andress, and Cheryl Almgren Taylor.
Visitation for Alvin will be held at Greenlawn Northeast on Friday, May 15, 2020 from 4:00 - 8:00 pm and a graveside service will be held at the same location Saturday, May 16, 2020 at 10:00 am.
In lieu of flowers, those wishing to remember Alvin can donate to the Bakersfield First Church of the Nazarene or a charity of their choice.
Due to the current health restrictions, a memorial service for Alvin will be held at a later date.