To share your memory on the wall of Alvin Almgren, sign in using one of the following options:

Provide comfort for the family of Alvin Almgren with a meaningful gesture of sympathy.

To send flowers to the family or plant a tree in memory of Alvin Arnold Almgren, please visit our Heartfelt Sympathies Store.

Receive notifications about information and event scheduling for Alvin

We encourage you to share your most beloved memories of Alvin here, so that the family and other loved ones can always see it. You can upload cherished photographs, or share your favorite stories, and can even comment on those shared by others.

Posted May 18, 2020 at 12:02am
Having your dad a part of our church has been a real inspiration to us. Achieving his 100th year was awesome. Our families shared several of the same things. Yout family and my family came from Sweden, Loved Jesus, and enjoyed the southern gospel music. With your son making a mark in the music you loved as a member of the legendary Speer Family and other groups. We enjoy his participation with us at Word of Life making our music better. We rejoice in knowing we'll be together again in Heaven. My love and prayers are with you all. Sincerely, Sharon Speck Elmore and family (Judy Nelon & Linda Harkins)
Comment Share
Share via:
MB

Posted May 15, 2020 at 10:52pm
We are sorry to hear of Grandpas passing. We will miss him dearly. Sending our love. Love, Darrell, Lorie, Haylie, and Chase

Posted May 15, 2020 at 09:24pm
Alvin and my wife and I have been good friends now for several years. I have enjoyed time spent with him and would depend on him for moral and spiritual guidance and thought. I know of no other person who lived a more Christ like life than Alvin did. He lived a life of service to Christ and the Church. I am amazed at the number of things he has done for the Nazarene Church in general and the Bakersfield First Church of the Nazarene in particular, and for the cause and witness of Christ. I will miss his historical stories that he would tell that had occurred throughout his lifetime. It was always great to be around him and to recognize his dedication and faithful attitude. My wife and I have always been amazed at Alvin's brilliant mind and thought processes. He always made sense in everything he said and did. I have never known of any better Christian example than Alvin Almgren. We will miss him a great deal but at the same time we are reminded that he has been united with family members who have passed on and that they are all now safe in the arms of Jesus. I will miss him until we meet again. My most sincere condolences to all the family and friends.
Comment Share
Share via: 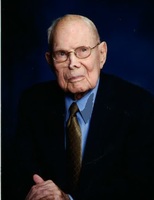